We started the charter cruising west to do some snorkeling, chilling on a beach, and exploring the beauty surrounding the mangrove islands. I was chartered by a family with three generations on board. So much fun. We snorkeled an area full of sponges which host small colorful fish and lobsters. It is definitely an easy place to snorkel, sheltered from the wind and quite shallow. Great for beginners or people needing a refresher coarse.

We proceeded through the Key West National Wildlife Refuge to check out some cool sand bars after deciding it was a bit too bumpy to snorkel the coral heads just off one of the islands. We dropped anchor and enjoyed the beautiful scenery of nothing but water and remote islands. 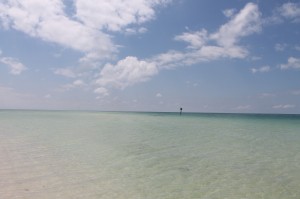 After a bit of relaxing and quite a few laughs we continued our adventure to the next island. Well luckily we were interrupted by a playful pod of dolphins. Which made us all very happy. One of the females had a very young calf attached to her side so we were careful to stay clear as not to worry the mom. What an incredible sight to see the baby follow the mom and mimic her every move. 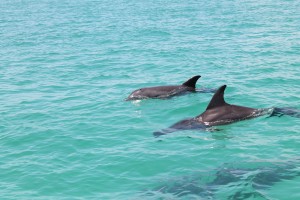 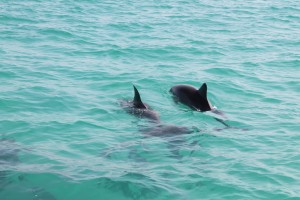 Dolphins are always the crescendo of any trip, but we dedided it was time to hit the beach. The remote island is the only island with a natural beach regardless of the tide. The beach is definitely a local’s favorite. It also has quite a few shells and a lot of hermit crabs. They enjoyed a picnic lunch and relaxed in the sun for awhile. 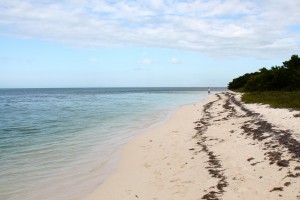 Just off the island is a substantial shipwreck where I took them to snorkel. Usually full of large schools of fish. At one point a very large Goliath Grouper had a residence there. This time they saw several very large Southern Stingrays and a multitude of fish.

To conclude our fabulous day on the water we headed back to Key West to watch the sunset. While doing this we encountered another pod of dolphins that swam right in front of the bow of the boat. This was the closest and most memorable experience they have ever had with dolphins. We are so fortunate down here to have so many of them and especially when they are seeking attention from their human friends. 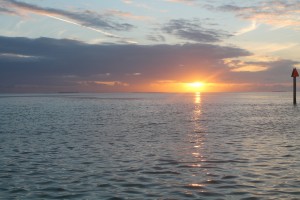 I am grateful to have shared such a wonderful day with my clients. Anytime I introduce the beauty of the backcountry to people, I get to fall in love with it all over again. This trip was definitely one of those days. I love Key West, but I love the surrounding waters even more.

I finally had the opportunity to head to a remote island with an endless white sandy beach at low tide with a family that chartered me. It was the parents and three grown kids. Upon arrival everyone was amazed at how gorgeous this area really is. We were the only boat there. It is an island in the Great White Heron National Wildlife Refuge about 15 miles North East of Key West. The drive out there is through gorgeous mangrove islands and large white sand bars all along the way. One of the most picturesque places in the Florida Keys. 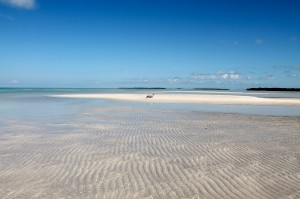 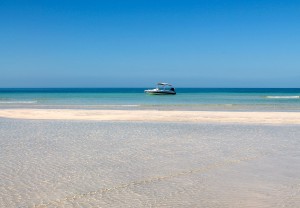 This is also a perfect place to teach beginners how to snorkel. Shallow calm waters with a Coral hard bottom full of small tropical fish. In no time they had mastered snorkeling. I knew they would be comfortable when we snorkeled a reef. They even encountered a large Barracuda and didn’t flinch.

After relaxing on the beach for a bit we continued their boat charter to more fabulous locations. We cruised the Gulf of Mexico to the next set of islands to explore one of my favorite sandbars. Immediately we saw a Bullshark in about 1 1/2 feet of water swimming quickly across the sandbar definitely on the scent of something. Also we saw large stingrays, a school of Bonefish (that we saw a shark chase after),& a large Nurseshark. Lots of activity on the Flats in the Florida Keys during a low tide. My favorite time to relax on the Hurricane deckboat and watch an array of marine life cross a white sand bar. 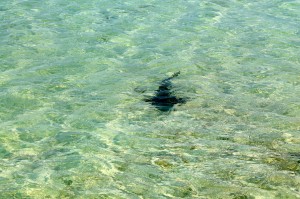 We continued on past several mangrove islands back to the gulf to try our luck at dolphin watching. Key West dolphin watching is by far one of the best parts of my job. Amazingly we discovered them just off Key West towards the North a few miles. They were playing in about 10 feet of clear blue water. You can distinguish all their details as they swim by the boat. In this case we came across them wrestling and jumping out of the water having loads of fun. We even saw the younger dolphin calfs playing around, always an incredible sight. 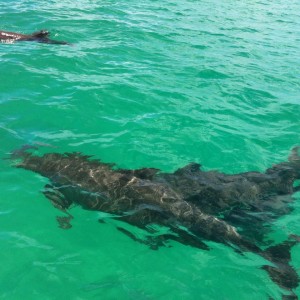 After sometime enjoying dolphin watching, we stopped another white sand bar to have lunch and enjoy the surrounding beauty. It is nice to charter a private boat charter to be able to do what you want when you want with the knowledge of an eco guide to show you amazing places just outside of Key West. And also not worry about driving. Just sit back and relax and enjoy the ride!

At last everybody was ready to snorkel the patch reef. We saw large Stingrays, Barracudas, a small Nurseshark and lots of colorful tropical fish. For beginners they snorkeled very well, looked like pros. On the way back to Key West we stopped at a small shallow wreck to snorkel some more and they were surprised how it was loaded with fish. We have lots of snorkeling options in Key West, from patch reefs to all sorts of wrecks to mangrove islands to sponge beds. Key West snorkeling gives you alot of opportunity to view an array of marine life. It definitely is a great reason for a Key West vacation.

We were very fortunate to enjoy a really nice day fishing just east of Key West in the backcountry.  We caught some Ladyfish, and lost quite a few as well.

We cruised around the basin just off the Gulf of  Mexico and had quite a few bites, nothing too substantial.  We landed some Jack Crevals.  We were hoping for some Pompano that we spotted rolling around, but didn’t catch them.

We had quite a few visits from Black Tip Sharks, one which ate a Ladyfish that we just caught!  Cut him right in half, and then came back to finish it.  So we rigged up to Shark fish, and landed a young Black Tip Shark!  We were hoping the bigger ones we saw would make the young one bait as well, but to no avail.  Still a really good fight for a beginner angler in the Florida Keys, especially when you are light tackle fishing in shallow inland waters.

They were happy to fish and really enjoyed the eco-tour.  We saw a large Loggerhead turtle, several smaller ones, Stingrays, Sharks, a Spotted Eagle Ray, and some unknown finning fish on the flats.  Jury is still out whether it was a Shark, Dolphin, Permit, or Tarpon.  Before returning to the dock we did a short Key West tour from the boat in the Key West Harbor.  We pointed out different Key West Bars, Restaurants, & Hotels.

Started the day looking for rolling Tarpon just off Key West.  We were successful in that pursuit, but just couldn’t get the Tarpon to eat!  So we tried fishing a wreck nearby for Mangrove Snappers.  When I dropped the anchor we noticed a large Barracuda near the wreck.  My client, Derrick, casted a few times, but the Barracuda was  clearly aware of us being there.  We did catch some grouper & snappers, but only kept a large grey snapper.  One of the largest I have seen in awhile.

We then continued to travel West of Key West in pursuit of Jack Crevals.  We landed a few Lane Snappers, Mutton Snappers, and a good size Bar Jack who put up a strong fight.  Quite fun and enough to feed their family freshly caught fish that evening.